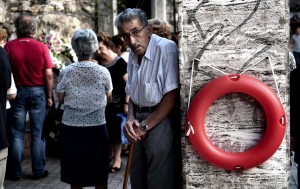 There are so many contradictions to the neoliberal system, so many complexities, so let’s leave all the heavy-duty matters to those who like statistical analyses & flow charts & to those who’ve read Das Kapital & lived to tell the tale. Let’s just take on the ones we understand, the ones that hit us right in the kisser & take our breath away. Like why aren’t Greek’s over 300 millionaires & billionaires being asked to step in & save the economy? Why are they going after the pensioners who don’t have a pot to piss in?

One media source did an analysis of the Greek pension system. He concluded the system is a mess, full of corruption & theft. There were bogus claims, early retirements, loopholes, inefficiencies, bureaucracy, tax evasion. No one ever said capitalism was good at organization–especially for social services. But that’s a Mickey Mouse analysis, an evasion from admitting that neoliberal capitalism is in crisis. That’s the heart of the problem, not organizational chaos. The system isn’t working & they won’t try to repair it by clipping private profiteering or even by a modest reform like taxing the super-rich.

Is it too abstract a question to ask if there might be a relationship between the increasing impoverishment of retirees, increasing homelessness, & the growing number of millionaires & billionaires? Cause it sure as hell looks like one of those causation things.
Greek’s pension system does need reform. No question about that. The first reform is that those pension payments need to be at least doubled, accompanied by rent & transportation subsidies. Too expensive the neoliberal economists say, too extravagant? Nothing’s too good for working people who fought fascism in WWII, had to live through military dictatorship, raised their kids & cared for their elderly on a shoestring.

The Troika wants young Greeks to believe this fellow & other seniors are responsible for the financial crisis in Greece & that it has to be solved on their backs. It’s that old divide & conquer trick of turning on the vulnerable–a trick that’s only grown more putrid with age. The Greek chorus of resounding “No” was another way of saying “an injury to one is an injury to all,” which is the iron law of social transformation.

Our fullest solidarity with Greek seniors.