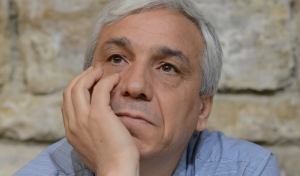 There’s no minimizing how complex & difficult it is to understand the war in Syria. That’s particularly true for those who live outside the Middle East & know almost nothing, or only fabrications, about the politics of regimes involved in the war. Racism toward Arabs in literature, film, & propaganda means most of us are handicapped from the get-go so who we look to for analysis is of the essence.

The current of progressives coalescing in the Hands Off Syria Campaign represent, not solely but in their majority, activists from the Stalinist & libertarian traditions. Vanessa Beeley, a libertarian, is associated with that current. When the US Peace Council traveled to Syria to meet & pledge fealty to Assad, they reported that their guides in Syria were Eva Bartlett & Beeley, both pro-Assad journalists. Writings by Beeley about Syria are circulated widely by members of the Hands Off Syria coalition & she is more & more frequently interviewed by Russian, Iranian, & libertarian media as an authority on Syria.

Beeley’s analytical repertoire is quite limited: Assad is not a dictator; there never was a popular uprising against him in 2011; Russia & Syria get blamed for bombing civilians when it is US-backed “jihadists” who are responsible. Her rabid focus now is vilifying White Helmet rescue workers pulling civilians out of bombed out buildings as nefarious operatives & on exposing what she calls the “Omran Deception”–that the little boy rescued from a building bombed by Russia was nothing but a staged propaganda event, which is the same position held by Assad.

There is little evidence Eva Bartlett has experience or credentials as an authority on Syria or on anything. The fact that she & Beeley have free access to enter & travel in Syria is significant because even reporters from major media have limited access. But of course, none of them are as ardently pro-Assad as Bartlett & Beeley or are delivering antiwar activists to Assad’s defense.

Who is Vanessa Beeley & how has she achieved such political status when her experience in the Middle East, by her own admission, only goes back to 2012? Previous to that she was working in sales for firms in the UK. Around 2012, she began volunteer work with a Palestinian group, began blogging & identifying herself as an independent researcher “focused on Egypt & Gaza, Palestine, Syria, Yemen, Iraq & Iran.” In four years, she went from sales to being an expert analyst of almost the entire Middle East?

Beeley doesn’t attempt to hide the fact that her father is Harold Beeley, a British career diplomat in several Middle East countries who began his career in 1946 as part of the joint UK-US Anglo-American Commission of Inquiry on Palestine, which recommended partition & the immigration of 100,000 Jews to Palestine. He became the closest adviser to Foreign Secretary Ernest Bevin who administered the end of British colonial rule over Palestine & facilitated the creation of the state of Israel.

One doesn’t impugn the authority of someone because their father played a reactionary, colonial role in the Middle East. But his role also doesn’t recommend her as an authority on the subject. What does she think of the mess he administered & of his involvement in the dispossession of Palestinians & violent creation of Israel?

What makes her an authority on Syrian politics when she doesn’t appear to have any experience at all outside of that independent research? Did her father’s stature give her entry to the inner circles of Assad? How can she claim there was no 2011 popular uprising against Assad when Syrians & Palestinians who were there testify otherwise? What makes the voice of a European rookie more compelling than the experienced voices of the Syrian revolution?

This article is an interview by Syrian activist Yassin Al-Haj Saleh, whose political experience goes back to the repressive regime of Hafez al-Assad, Bashar al-Assad’s father. He served 16 years as a political prisoner & after his release was an active part of the 2011 uprising. He now lives in exile in Turkey, like thousands of other Syrian activists against Assad’s dictatorship.

This blog is a collection of his political writings & antiwar activists who want to understand the character of the Assad regime, the 2011 uprising, & fundamentalist extremism are advised to study them & reject the pretentious, false credentials & Islamophobic claims of Vanessa Beeleyhttp://: http://www.yassinhs.com/