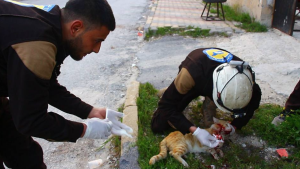 White Helmets treat cat injured by shrapnel in Syrian bombing of Idlib: war is such a horror for human beings that we seldom think of its horror for helpless animals. War is also an animal welfare issue.

Demand the immediate cessation of Syrian, Russian, & US-coalition bombing in Syria & the immediate, unconditional withdrawal of all foreign military forces from Syria.