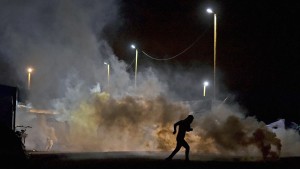 The French regime (of the sewer-socialist kind) is squeezing out crocodile tears while it exploits the terrorist attacks in Paris to wipe out the democratic heritage of the great French Revolution against feudalism–including the rights of free speech, freedom of association, public assembly, & religion. Someone once said that when fascism arrives it will be draped in the flag of patriotism. It will also be wielding a billy club, hurling tear gas & stun grenades, & marching under the banner of racism & xenophobia. Refugees & immigrants–especially those of darker hue–will always be the first targets of a masterful & malignant divide & conquer strategy.

So it comes as no surprise that the French government is talking trash about refugees on the eastern borders of Europe, turning hundreds of thousands of people into likely terrorists. Many swooned when just after the terrorist attacks, Francois Hollande said it was France’s “humanitarian duty” to take in Syrian refugees. You bet your sweet ass it is! It’s also international law. But it’s on international issues that sewer-socialists get constipated. They always have since they first emerged supporting their own governments in the barbarisms of WWI fought over colonial division of the world.

What our man Hollande didn’t say is that his regime denies social services & housing to Syrians & other refugees from the Middle East & has been using riot police to break up & dismantle their encampments–precisely as it has long done with Roma citizens & residents.

For the past several months, the regime has also been attacking refugees at Calais with tear gas & grenades, breaking up & dismantling their encampments & forcing them to survive in frigid cold & winter rains with no social services or temporary housing–not even toilets or clean water. This isn’t just an abrogation of international refugee law & rights. It is an assault on every achievement of human civilization that recognizes a human being when it sees one & treats them with the dignity deserved. Only fascists would treat a dog in such a manner.

This photo is refugees–already beleaguered to the max as they repeatedly attempt passage to England–running from a tear gas assault at Calais. Reportedly, lorry drivers are angry when refugees try to mount their trucks & vandalize them if they don’t stop. More’s the pity. Marx was on to something essential when he said “workers of the world unite.” If the truckers simply stopped & picked up the refugees for safe passage through the tunnel, they wouldn’t just avoid vandalism; their solidarity with fellow working people would be the beginning of changing the world.

Immigration is a human right. Asylum is international law. Open the damn borders.