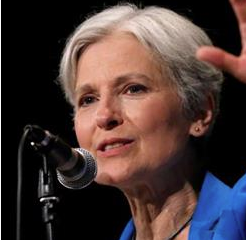 Jill Stein’s compromised politics on US militarism, her left Zionism, her support for Assad’s dictatorship & Russian military intervention disqualified her in the minds of those unwilling to accept discounts on fundamental principles. Where she was cogent was on the issue of lesser evil politics which she elaborated with great insight.

But what in the hell is she doing now by raising $2.5 million for a vote recount in Wisconsin, Michigan, & Pennsylvania? She said:

“After a divisive & painful presidential race, in which foreign agents hacked into party databases, private email servers, & voter databases in certain states, many Americans are wondering if our election results are reliable. That’s why the unexpected results of the election & reported anomalies need to be investigated before the 2016 presidential election is certified. We deserve elections we can trust.”

She wants to legitimize all that through a recount in three states & reassure American voters that the process is democratic? What she ought to do is elaborate how undemocratic the entire electoral system is for third party candidates, including the number of signatures & substantial fees required for ballot status.

To show the craziness of Stein’s recount campaign, the Clinton campaign is awash with millions of corporate dollars & could finance a recount challenge out of the petty cash drawer. But Clinton is not challenging the election results even though it appears the election was stolen from her, even though she is devastated by the loss, because Clinton understands that her responsibility in the two-party, lesser evil shell game is to render the election process legitimate & accept the results graciously. She has to eat crow if she wants a future in US politics.

Stein is responding sharply to those undemocratic fools, like Rachel Maddow, who insist third party candidates stole the election from Clinton. Perhaps such critics would prefer a one-party system where Clinton was assured victory–like Syria under Assad. Stein doesn’t pull her punches & calls that perspective delusional scapegoating. Is this foolish recount campaign an attempt to stop the sniping from such critics?

The recount campaign by Stein isn’t just a waste of money; it’s a political fiasco. What Stein should use the money for is rebuilding the social movements paralyzed by the election. She could use it to help build a massive solidarity campaign for the Standing Rock Sioux fight against the Dakota Access Pipeline; she could use it to rebuild the international antiwar movement.