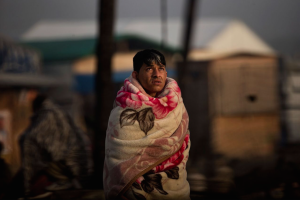 A refugee watching as the “Jungle” refugee camp at Calais is dismantled & refugees are bussed to what are glorified concentration camps to await deportation, many of them back to war zones..

So it turns out Islamic fundamentalism does not present the greatest threat to civilization. Westernism–the ideology of might makes right, of scorched earth military policy & wars & occupations that go on for decades–has proven much more deadly & catastrophic.

Since 9/11, Westernism, engineered by the US & Europe, has killed & maimed millions of people in the Middle East, none of whom had a damn thing to do with the attacks in New York. The millions of refugees fleeing war are treated as the terrorists & denied asylum.

What a con. What monstrous crimes.

We demand the immediate, unconditional withdrawal of US-NATO out of Afghanistan, Syria, Iraq, Somalia, Libya, Pakistan, Yemen; Russia & Iran out of Syria. End the bombing of cities & civilians.