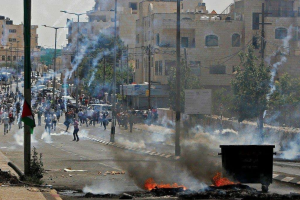 Bethlehem, West Bank stands with Gaza: we cannot forget the protests in the occupied West Bank in concert with the Great Return March & protests against the US embassy move to Jerusalem. Today in Beit El, West Bank, Israeli occupying troops fired rubber bullets, live ammo, & deployed drones equipped with tear gas on unarmed protesters, just as they are doing in Gaza. One 20-year old protester said “The suffering of people in Gaza, Jerusalem & ‘48 areas is the suffering of everyone. The pain is for the whole of Palestine.”

Meanwhile, at the UN Security Council, Israeli UN ambassador Danny Danon accused Hamas of using protesters as human shields. “They are not protestors,” he said but “a mob that carries explosives & sometimes you cannot differentiate between terrorists & the people around them.” The line being advanced by Israel & all its apologists & stooges is that Israel cannot be criticized for using live fire on unarmed protesters because Hamas is to blame.