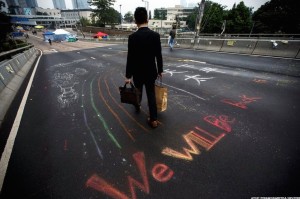 In the past several days police have been forcibly evicting democracy protesters from the encampments they’ve held for over two months in the financial & commercial districts of Hong Kong. Cops brought in wrecking crews to dismantle the barricades & arrested any who resisted. This is the Admiralty district where financial institutions are located.

In one area of Admiralty protesters left graffiti saying “We are dreamers.” Here they left the inscription “We will be back.” And those inscriptions can pretty much stand as metaphors for all the massive social upheavals across the world in the past several years. The conclusion not to draw is that these social struggles have been decisively defeated for all time & so were never worth fighting in the first place. The most apt word to use here is that social transformation is a dialectical process, a complex dynamic where there are routs, retreats, crushing defeats, even massacres. Egypt surely stands as the worst of all that. And still activists publicly defy the military regime. And still in all these places rebellion against tyranny, whilst silenced, continues to seethe at the most profound levels because the unbearable conflicts of neoliberalism, the barbaric phase of capitalism, are not mediated by repression.

Cynicism, & lord knows, misanthropy have no place in social transformation because they lead in the wrong direction–from defiance against tyranny to the line of least resistance, sucking down beers in front of a TV watching sitcoms. This is why the Palestinians are so important. For 66 years “We are dreamers” & “We will be back” has been written all over their struggle. Now as Palestinian solidarity crescendoes around the world to forge a mass movement so too does the eruption of mass opposition to racist tyranny in the US. Racism is the common denominator of those struggles & one of the most oppressive forces in the world today. The potential of Palestinian & Black power to change the balance of neoliberal terror cannot be overestimated. Moving those struggles forward will resonate among others forced to retreat from battle & give them new energy, new sources of hope & courage. That solidarity thing is a mighty potent force.

“We will be back!” Such a simple declaration of defiance so promising for the human race. “We are dreamers!” The clarion call of all who work to make this world suitable for human beings to live & love in.