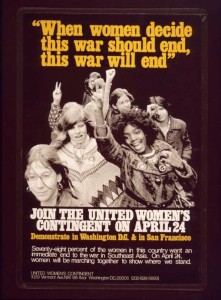 War is not just another issue in a litany of social crises created by capitalism. It doesn’t “rank” equally with movements opposing social hatreds but is of preeminent importance because it always incorporates racism, misogyny, & every other political malignancy.

For that reason, it is a call to arms that cannot be ignored–& for that reason, beginning with opposition to WWI & continuing with the anti-Vietnam War movement, trade unionists, feminists (the ones now so maligned as racist & sex-negative), Black activists, LGBT activists, immigrant rights activists, students, incorporated their particular concerns into the antiwar movement by building opposition within their organizations & constituents & forming contingents at demonstrations. That was true around the world, not just in the US.

War is where unbearable tensions in the system erupt, where armies merge to crush resistance & maintain the iron rule of tyranny: Afghanistan, Iraq, Palestine, Kashmir, Yemen, Syria, & increasingly, African countries like Somalia. People of good will cannot simply turn away from all this because they’re busy or because the antiwar movement isn’t radical enough. That’s where all the bad-mouthing of liberals proves itself outrageous ignorance–since many liberals have sustained activism & financed antiwar protest every single war while many socialists abstain because the movement doesn’t meet their standards of radicalism (or today because they’re working on the Sanders campaign).

There is no political question more urgent than re-building the international antiwar movement, including Palestinian solidarity, & educating our constituents on the meaning of war. As neoliberalism spirals into unending war all over the planet, our historic mission is to create opposition to that if humanity is to stand a chance of survival.

Photo is poster from anti-Vietnam War movement women’s contingent at April 24, 1971 protest in Washington, DC which drew over one million people. Anita Bennett was one of the lead organizers of the contingent.

(Photo from Library of Congress)