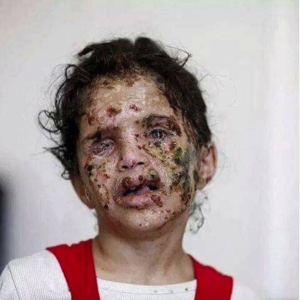 This is Walaa Hussien al-Hutroum who was 9-years-old in April 2015 when Saudi-US-UK coalition bombers hit Sanaa, Yemen. It was just days after the carpet bombing siege began in March that year. Walaa was hit with shrapnel from a missile that struck on a road she & her family were traveling as they fled from airstrikes in their town. It’s reported today that Saudi Arabia is using US-supplied white phosphorous in its continuing bombing campaign of Yemen. The US is as guilty of war crimes in Yemen as is Saudi Arabia. It should be noted that the carnage caused by artillery & missiles is indistinguishable from chemical weapons. Just because the UN finds some weapons legal & others illegal does not mean we have to accept that distinction or recognize any weapons as morally & politically legitimate.

Assad supporters are engaged in an unseemly debate denying the regime’s use of chemical weapons in Douma. But they claim Syrian & Russian bombing of civilians, or what they call “jihadi terrorists,” is legitimate to defend Assad’s right to self-determination. No it isn’t. Dictators have no rights to national sovereignty except in the political cosmology of fascists & Stalinists. The historic principles that guide antiwar & human rights activists absolutely exclude the bombing or shooting of civilians with any kind of weapons.

Because the antiwar movement is so busy defending the Assad dictatorship & justifying Syrian & Russian bombing of civilians, it has not given the necessary political commitment to Yemen, which is being bombed to destroy the Yemeni Arab Spring uprising, or to Iraq & Afghanistan. The only principled demands are the immediate cessation of bombing in Yemen, Syria, Iraq, Afghanistan, Libya, & the immediate, unconditional withdrawal of all foreign military forces.