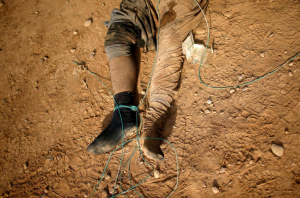 Emancipation US-style, Mosul, Iraq: this is the dead body of an alleged ISIS fighter who had been dragged by Iraqi soldiers. It is absolutely forbidden under the Geneva Accords & is considered a war crime to desecrate or in any way mutilate or abuse the bodies of enemy combatants. If the soldiers dragging the body had been US special forces rather than US-trained Iraqi soldiers, this photo would likely not have seen the light of day.

The desecration of corpses by the US military has been an issue in almost every war & is usually not exposed until years after the incidents. In one notorious incident in the Vietnam War, an army sergeant posed for pictures holding up two decapitated heads of Vietnamese. There were other incidents of US soldiers posing for photos with cut off ears & fingers. In Iraq, there were photos of US Marines pouring accelerant on Iraqis & setting them on fire, of soldiers mugging for the camera next to dead bodies, of Iraqi corpses covered with flies & one being eaten by a dog. In Afghanistan, US Marines were photographed & videoed urinating on the bodies of suspected Taliban fighters. There were many gruesome & unspeakable crimes committed by US special forces toward Taliban who surrendered.

According to a US Department of Defense briefing in October 2016, there are between 3,000 & 5,000 ISIL fighters in Mosul. In an October 2016 interview with Mosul Eye, an anti-ISIS blogger from Mosul, there are between 8,000 & 9,000 ISIL fighters. He claims ‘half of them are highly trained & the rest are either teenagers or not well trained.’ Judging from the size of the body in this photo, this person was a teenager or even younger.

Media has long been filled with headlines about ISIS recruiting & training child soldiers. Some of the experts they quote are classic Islamophobes & are likely inventing their data. One claimed ISIS recruiters target “lone, disaffected male Muslims or male Muslim converts.” Others claim ISIS is recruiting kids from overseas & offering package deals to entire families. The package deal nonsense would explain how foreign recruits under the age of 12 manage to get on airplanes & find their way to Iraq without their parent’s permission.

The recruitment, conscription, & use of child soldiers is a war crime. So if anywhere close to a half of ISIL fighters in Mosul are children—or even if only a third or fourth of them are children—then the conduct of war should be altered to protect them as victims & not treat them as enemy combatants.

Of course, all the information in this post was drawn from mainstream media so if Assad supporters are right, most of it is fake. The conclusions drawn must also then be fake.

US out of Iraq!