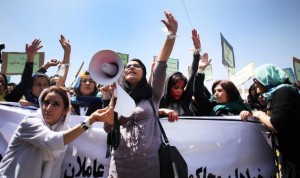 Where did the distinction between justice & kangaroo courts get all mixed up? Was it in the US legal system where cops walk away from murdering unarmed Black teens or Black & Latino kids get railroaded into jail for minor offenses & on faulty evidence? Was it with the Egyptian & all the other military regimes where dictators walk away from mass murder without even a shake of the naughty finger? The differences are not subtle.

Now we read on May 6th that after a two-day trial an Afghan court sentenced four men to death for the March 19th murder of Farkhunda in the city of Kabul. Forty-nine people are standing trial & the judge handed down sentences for 30 of them. Eight defendants got 16 years in prison; eighteen were acquitted. The remaining 19 defendants are police officers accused of neglect of duty. Can anyone seriously claim all 30 defendants were heard in the course of two days? That would give them about two minutes each to present their defense. Or can it be claimed all of the guilty were among the defendants?

You don’t have to be a defense lawyer to recognize a mockery of justice when you see one. There’s no way in hell 30 defendants were able to plead their case in two days. One fellow said his acquitted brother was at work during the assault. That is the kind of problem that comes up in trials & why justice requires time, witnesses, & evidence. An MP assigned by the government to observe the trial said she was dismayed by the acquittal of 18 defendants. “Even if there was no very clear evidence against them, they should be punished,” & she added, “As responsible citizens, how could they just watch a woman being killed by a group of men? It should be a lesson to others.” A court of law is not the same as Sunday school. If unarmed men stood there without intervening against mob violence, fear would easily explain that. The question is, why 19 armed policemen stood there.

The father of Farkhunda addressed the court before the verdicts where he claimed the man who drove over Farkhunda’s body with his car was arrested & then released. “We don’t accept today’s trial, it was unjust,” he told the court. “The main criminals have not been arrested.” Farkhunda’s family wants justice for their daughter, not a mockery & travesty.

The photo is an April 27th protest in Kabul chanting “We are all Farkhunda! We want justice.” We stand with them.