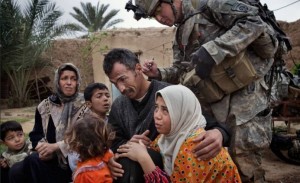 Reposting from three years ago today; it’s one of the rare instances when media reported the monstrous details of US occupation. This incident was reported one & a-half years after Obama announced an end to the Iraq War. Obama will go down in history for his toothy-assed grin & his diplomatic stunt of declaring ongoing wars ended.
********
“The US war against Iraq again provides a compelling answer to the question, “Why do they hate us?” Wasn’t it the Nazis who introduced tattooing numbers on Russian POWS & at Auschwitz & other extermination camps? The barbaric practice has always been seen as dehumanizing & ignominious.

But here (in March 2007) a US soldier is marking the back of an Iraqi man’s neck with numbers to denote his home & neighborhood location in a system designed to determine if people are moving around their own town of Qubah, Iraq in violation of a US military lockdown order after a US attack. Once again, it sounds like a damn good reason to hate.

US out of Iraq! US out of Afghanistan!”