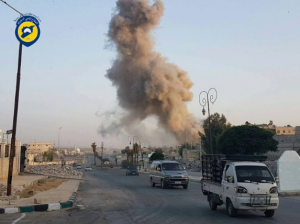 The Obama administration has proposed a new military alliance with Russia over Syria. It would do wonders to counter libertarian explanations of what’s going on in that country, in particular the roles of US & Russian warplanes, if they based any of their analyses on reality rather than speculations & wishful thinking.

To deny that Russia is bombing civilians is grotesquely reminiscent of those who continue to deny the mass murders & gulag of Joseph Stalin in the USSR. To do that, you have to take the Russian foreign ministry at its word & dismiss the testimony of Doctors Without Borders (MSF) & Syrian & international human rights groups.

According to media reports, what the US proposes is to fly joint military operations with Russian warplanes against al-Nusra, the al-Qaeda paramilitary force in Syria which opposes the Assad regime. In exchange, the US wants Russia to pressure Assad to stop bombing US-backed paramilitary forces.

Several questions are raised by this deal: if–as so many left & libertarian analysts claim–the US wants regime change in Syria, why would it be bombing al-Nusra? Wouldn’t al-Nusra, seeking the same goal, be a natural US ally? And what exactly are US-backed paramilitary forces trying to accomplish in Syria if not regime change? Are they acting for or against Assad? Are they for or against the popular revolution to overthrow Assad? If their politics are incompatible with those of al-Nusra, doesn’t this new military deal just blow that regime change scenario right out of the water?

Despite a massive, high-tech war room monitoring the war in Syria, the US claims it doesn’t know who’s bombing Syrian civilians with barrel bombs & white phosphorous. If they don’t have enough military intelligence to tell whose warplanes are taking out everything in sight, how in the hell will they be able to distinguish one paramilitary group from another?

Does anybody else see the possibilities for Armageddon? The historic imperative remains: rebuild the international antiwar movement & demand the cessation of all military intervention in Syria.

(Photo of bombing in Aleppo, Syria by evil fairies from outer space via AP)