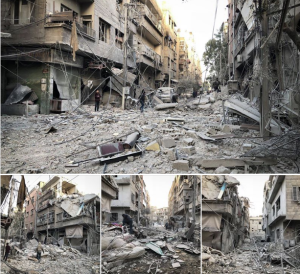 Destruction from Syrian & Russian air strikes in Eastern Ghouta: Assadists & other fascists say this is necessary to protect the self-determination of the Assad dictatorship. Self-determination for dictators is a new political concept for former antiwar activists but the usual hack of fascism. How has it come that those who claim they oppose war now support the carpet bombing of civilians & march in lock-step with fascists? It’s called rotted at the core & time to skulk off the stage of history in ignominy.