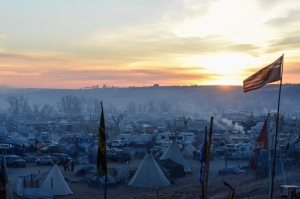 The US Army Corps of Engineers (an agency of the US Pentagon) informed the Standing Rock Sioux tribe last Friday that on December 5th (a week from today), they will begin closing down the Oceti Sakowin encampment where opponents of the Dakota Access Pipeline from around the country have set up base. The US Army Corps said it would arrest residents for trespassing & prosecute them under federal, state, & local laws.

It was reported a few months ago that members of over 300 Native American tribes from around the US, between 3,000 & 4,000 pipeline opponents, & thousands more on weekends live in that camp to stand in solidarity with the Standing Rock Sioux–even during the onset of a brutal North Dakota winter.

Today, after Standing Rock Sioux leaders said they intend to stand their ground & not leave, the US Army Corps said it will not forcibly remove solidarity activists next Monday. There’s no way they can remove activists who have no intention of leaving without using force. The international attention & opposition to the violations of Indian sovereignty in North Dakota have made the US government uncertain about how to handle this. The use of excessive force is necessary against intransigent opposition but they know it will incite more widespread solidarity & active opposition.

Not everyone can camp out in North Dakota. But there are rallies around the country, including in Washington DC this weekend. Here are some links where you can render financial & other support:

(Thanks to Ingrid Elísabet for the links)