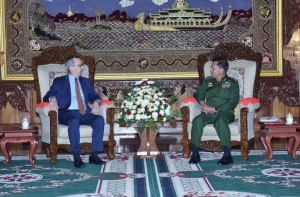 US ambassador to Burma Scot Marciel met this week with chief architect of the Rohingya genocide General Min Aung Hlaing. According to a report about the meeting on the general’s FB page, he spent most of the meeting explaining to Marciel that British colonialists were responsible for the problems in Arakan state when in 1824 they brought in “Bengalis” to work as farm laborers & that these Bengalis who call themselves Rohingya remain “illegal immigrants” after nearly 200 years. The general never did get around to addressing accusations of genocide–& it doesn’t appear Marciel pressed him on the issue–but he accused ARSA of killing Hindus & Rohingya collaborators. He also claimed the number of Rohingya fleeing Burma–now estimated at over 520,000–is an exaggeration.

Out of the dozens of media reports about the meeting, not a one mentions what Marciel said in response to all this rubbish. Did he just sit there dumb as a stump nodding his head? Because Marciel knows exactly what is going on in Arakan state. It is not true the US cannot do anything to stop this genocide. He could cut the fake history lesson short by threatening to reimpose sanctions on Burma & prevent US companies from continuing to invest billions in the junta’s neoliberal economic program. He could talk just as bluntly & threateningly to the general as the US does to Iran & North Korea. Enough of this playing stupid stuff!

The 27-nation members of the European Union will vote Monday on a proposal to cut ties to the Burmese military & has threatened sanctions to stop the “disproportionate use of force” against the Rohingya. This is a dog & pony show if there ever was one. The EU already has sanctions against cooperation with the military junta but that hasn’t stopped Germany, Austria, Italy, & Belgium from touring the generals through their munitions plants & courting them for future sales. What they should be voting on is a proposal to reimpose sanctions against investments in Burma. That could bring the Burmese economy to its knees & stop the genocide.

Photo is Marciel & the general at their meeting which accomplished absolutely nothing for the Rohingya people. It’s just not profitable for the US to speak out against genocide.