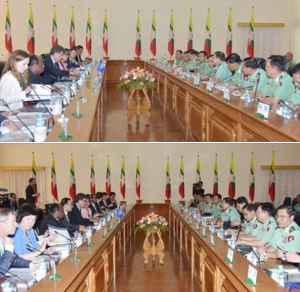 These are photos of the UN Security Council delegation meeting with Burmese officials last week about the repatriation agreement between Burma & Bangladesh, an agreement signed at the height of the recent genocidal onslaught & which excludes Rohingya from decision-making. The photos are from the wall of Senior General Min Aung Hlaing, the head of the Burmese military who engineered & presided over the genocide along with Suu Kyi. The genocidaire-in-chief gave an extremely revealing report on this meeting which doesn’t make the UNSC delegation come out looking good. But what’s significant about these photos is that the UNSC delegation (on the left side of the photo) is negotiating (really more like sweet-talking, if we are to believe the general’s report) with military officials, not civilian officials representing that so-called civilian regime that is forging democracy in Burma. These are another of those pictures worth a thousand lies that tell us what we always knew: there is no civilian government in Burma. It is the front office operation for the Burmese military. We have it from the general himself.