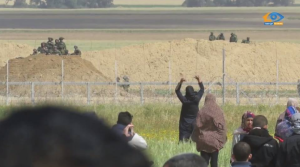 The UN Special Rapporteur on the state of human rights in occupied Palestine says Israel’s actions against Palestinians amount to a war crime. The problem with that designation is that only one side of that “war” is armed. Although isn’t that the prevailing situation with all modern wars where civilians who bear the brunt of the violence are considered only “collateral damage”? The problem in Gaza is that when Israeli snipers gather at the buffer zone with two levels of apartheid fencing around Gaza & start shooting unarmed protesters, that is treating human beings like fish in a barrel. It’s a very strong statement from the Special Rapporteur & worth reading here in full: https://www.middleeastmonitor.com/20180516-un-special-rapporteur-israels-actions-against-palestinians-amount-to-war-crime/

(Photo of snipers at the buffer zone from Human Rights Watch)