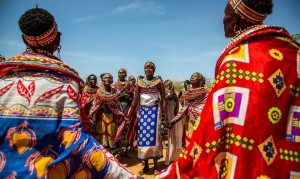 Umoja (“unity in Swahili) is a women-only village of 48 women & their children in Samburu Country, Kenya. It was founded as a sanctuary for women in 1990 by Rebecca Lolosoli, a feminist, & 14 other women she advocated for when they were raped by British soldiers garrisoned in the district. When she spoke up for the rape victims (who were stigmatized, some beaten & others accused of prostituting by their husbands & family) she was beaten by men in her village. When her husband did not protest the assault, she left him & founded Umoja with the other women.

The Guardian-UK is not the first to write on Umoja. More importantly, it’s not the first to completely misrepresent the story & turn it into a feel-good morality tale in the genre of white supremacy. As endless accounts going back years portray it, the rapes which set off the chain of events are an incidental part of the story. Some accounts don’t even mention them. What’s highlighted is the rebellion against the “traditional subordinate position of women” in Kenya, including forced & child marriage, female genital mutilation, domestic violence, rape–“all of which are cultural norms among the Samburu” people. It’s true most of the founding women of Umoja were socially ostracized & shunned by their husbands when they reported the rapes & the village now accepts women fleeing sexual & domestic violence of every kind. There’s no denying Kenya has widespread violence against women. It’s hard to find a corner of the planet that doesn’t.

Umoja is a marvelous countercultural initiative providing sanctuary to women but it is hardly a feel-good project. It relies for survival on charitable contributions & still only accommodates a small number of women–nothing compared to the actual number of women & children raped by British soldiers or sustaining violence. It is also surrounded by continuing violence under a repressive regime. Media reports that spiteful Kenyan men set up a village nearby by to harass & keep surveillance on the women. They don’t mention that England still maintains five military training facilities for over 3,000 soldiers in the region–which it has for 50 years. During that time, there have been hundreds of documented rapes by British soldiers. There are undoubtedly hundreds more unreported because the women are afraid of the social consequences. There is no current information on rape statistics by British soldiers in the region.

Communities in the region are pastoral & isolated victims would be attacked by soldiers in broad daylight while grazing animals, doing errands, walking; others were attacked in their homes. The rapes, including of children, were brutal–involving torture, beating, injuries; women say they were hunted down in packs & often gang raped. Many women had children born as a result of these rapes who also suffer humiliation & stigmatizing.

As early as 1972, village elders & district officers began reporting the rapes to senior Kenyan officials & to the British Army. The Kenyan government refused to intervene & the British government looked the other way, allowing widespread rape to continue with complete impunity. That situation prevails to this day. In 2003, 650 Masai & Samburu women rape victims took legal action against the British government. The British government accused the hundreds of litigants of forging hospital & police reports. Nothing has come of that suit to date.

In June of this year, Kenya & the UK negotiated a new military cooperation deal currently valued at about £58 million (Sh7.9 billion or US $91 million) a year. The pact allows up to 10,000 British troops a year to train in Kenya before they’re deployed to Afghanistan & Iraq. Britain wants a deal like the US has with Afghanistan & Iraq where English soldiers who commit crimes in Kenya fall under the jurisdiction of UK military law. Kenya wants them tried in local courts so the deal was only renewed until October. The rapes apparently were not mentioned in negotiations–only the murder of a herdsman by a British soldier.

The photo is the women of Umoja. Nineteen-year-old Judia (in the center) came six years ago to avoid being sold into marriage.

(Photo by Georgina Goodwin for the Observer)