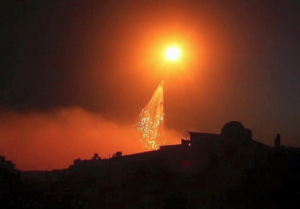 For those taken in by Trump & Nikki Haley’s outrage over Assad’s chemical gas attacks on civilians:

–How could they not remember that Syria is one of the countries included in Trump’s Muslim ban which Haley defends?

The deed before the word.

Photo is white phosphorous raining down on Raqqa in June 2017.