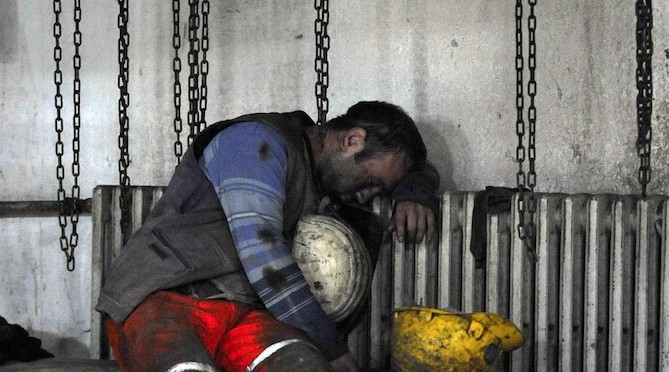 This despondent man is a coal miner in Manisa, Turkey waiting for hundreds of other miners to be rescued from a mine explosion on May 13th. Several media sources report Turkey has one of the worst safety records in the world in number of accidents. Thousands have been killed & tens of thousands permanently disabled by accidents. Of course, mine safety does not just include prevention of methane gas explosions but also protection from black lung disease which kills & disables tens of thousands of miners. And since they’re now shooting down striking miners in cold-blood (the Marikana strike in South Africa, 2012), mine safety also includes the right to strike & demand workplace safety.

It’s hard to see how international comparisons of workplace safety can be reliable when reporting agencies are governmental. The data collected is subject to alteration, obfuscation, & outright deceit. Does any country really want to publicize the number of child miners? The lack of safety equipment? The coercive & brutal labor-management relations & repression of labor organizing? The devastation of the environment?

Some media quote unidentified experts who claim Turkey’s mine safety record is due to poor safety regulation, which does not distinguish it one iota from the US, China, Brazil, South Africa, India, Bolivia, Peru, & elsewhere. In 21st century US, mining regulatory agencies are still formulating safety rules & mining union officials don’t seem in any rush for them despite continuing accidents & deaths, especially from black lung disease. In one ten year period in the US (1995-2005), 10,000 miners died from black lung disease.

The experts (whose names are best left anonymous to protect them from shame) claim cultural attitudes toward workplace safety are involved in Turkey’s disregard. What cultural attitudes would those be? And how do they differ from greed in the US or China or India or South Africa or elsewhere? Or are experts again talking through their hats?

You give some experts long enough & eventually they get around to spilling the beans; they don’t know when to shut up: what’s really behind this outrageous safety record they claim is the lack of education & low level of organization among Turkish miners. We can dismiss that lack of education thing as an insult directed at working people from a whole repertoire of degrading put-downs. But the low level of organization thing, meaning strong unions, matters quite a lot. Many Turkish miners are unionized but judging from public response of union officials to the numerous accidents, it is likely as compromised as miners unions elsewhere which also think occasional peeps of protest suffice in place of militant action demanding safety.

Turkey’s prime minister Erdogan is being chided (when excoriation would be more appropriate) for saying: “Explosions like this in these mines happen all the time. It’s not like these don’t happen elsewhere in the world,” & he reeled off a list of global mining accidents since 1862 to prove his point. Fact is (& as despicable as Erdogan is), they do happen all the time–like the 2010 Chilean mine collapse where 32 miners were buried alive for two months. Last year, after a three-year mock investigation, prosecutors dropped any possible charges against the mine owners. So these accidents don’t just happen; the mine owners get to walk away scot-free from prosecution.

Workplace safety is a pivotal issue around the world & not just in mines. We only need look at working conditions for sweatshop workers, including fires & building collapses. Formulating & enforcing safety regulations is good. Working people organizing & demanding safe work conditions without compromise is infinitely better. Rules are good; kicking ass is more decisive.