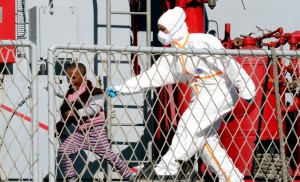 The catastrophic drownings of nearly 2,000 immigrants from African countries, Syria, Gaza, Iraq, Afghanistan, not even two weeks ago has not decreased the tsunami of immigrants attempting to cross the Mediterranean–so great are the pressures compelling them. According to media, almost 3,700 people were rescued by Italian rescue boats just on Sunday. Over 7,000 were pulled from wooden boats & plastic dinghies over the weekend by Italian naval & coast guard ships, merchant ships of various nationalities, some private vessels, & rescue ships run by Medecins Sans Frontieres (Doctors Without Borders).

Between October 2013 & October 2014, Italy ran Mare Nostrum, a rescue operation with a monthly budget of $12 million that rescued over 150,000 immigrants. It was hardly a model operation since fishermen off Lampedusa, an Italian island with an immigrant processing center, claimed the coast guard did little to save 369 immigrants who drowned there in October 2013. Mare Nostrum ceased operation & was replaced in November 2014 with Triton, a European Union (EU) border control operation with a monthly budget of $2.6 million & which has only rescued 20,000 people in the past six months. But of course their purpose is to prevent immigration, not rescue the drowning.

After nearly 900 immigrants drowned off the coast of Libya & the heat was on them, the EU held an emergency meeting to discuss the crisis. They agreed to triple funding for rescue operations. Media hasn’t reported sighting a single Frontex vessel out rescuing immigrants.

Videos & photos of the rescue operations show seniors & lots of children & families coming off the boats. The EU has no intention of allowing them refuge anywhere in Europe so pressure must be put on them to respect the ancient tradition of civilized humanity to give sanctuary. Neoliberal politicians are an ungodly lot & only respond to massive, sustained pressure–the political equivalent of beating them over the head with a two-by-four. And that is what it will take to give solidarity to our brothers & sisters who have every human & political right to receive sanctuary.

The rescue worker in the outfit is playing with the child rescued by an Italian frigate. Humanity thrives even when & where neoliberalism, the barbaric phase of capitalism, most wants it destroyed.