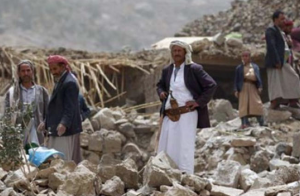 Trump’s trip to Saudi Arabia doesn’t appear to be more than an ostentatious dog & pony show that does not fundamentally change US policy toward the regime. The Saudis are using it to justify their murderous 2-year bombing assault of Yemen. A CNN commentator referred to it as a US proxy war but there’s nothing proxy about it. That’s a false concept. The US had been drone bombing Yemen for years under the guise of taking out Al-Qaeda before the Saudis began their bombing in March 2015 & remains directly involved as a combatant.

The US is not just directly involved in the bombing assault on Yemen but is selling the arms to Saudi Arabia to conduct the onslaught. The Obama regime sold billions in weapons to the Saudis to replenish their arsenal & offered a total of $115 billion. If the total of US military aid to the Saudis were added up since the 1990 Gulf War it would surpass, if not dwarf, the $350 billion arms deal over 10 years that Trump just signed. That doesn’t include the billions sold to the Saudis by US allies like Canada, the UK, France.

Amnesty International reported last March that since 2015 the US & UK have sent ten times the amount of arms to Saudi Arabia than humanitarian aid to Yemen. But of course. Because they are partners in a counter-revolutionary coalition to bomb the Yemen revolution to smithereens.

(Photo of bombed out site in Yemen from AFP)