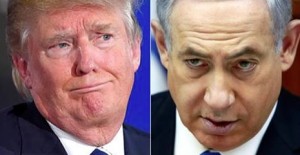 Can you imagine that Trump is giving the bum’s rush to Netanyahu after the latter took issue with his call for a ban on Muslims entering the US? He cancelled his trip to Israel scheduled later this month where he planned on visiting Al-Aqsa mosque. He certainly would have engaged in provocations against Palestinians. Netanyahu probably criticized him to deter him from coming & by reckless grandstanding embarrass or expose Israeli apartheid.

Israel, as a militarized colony more than a state, is pivotal to US hegemony in the Middle East. Although the US & Israel have differences over the pace of ethnic cleansing, their interests are of accord in every way. Trump is too provincial, xenophobic, racist, & stupid to grasp what is at stake in the relationship between Israel & the US. He knows he’s supposed to pay fealty to Israel in some way but he doesn’t get the politics of it.

The ruling elite could never let him near the White House–not just because he exacerbates social polarization (which they are orchestrating) nor because he picked a fight with Israel, but because they are not at all ready for outright fascist rule. That’s a last resort for a regime & the US is nowhere near it.

That explains why so many in high places are calling out Trump as fascist–to discredit him & scare people off. But his campaign is toast. It will be a welcome day in the republic when the loudmouthed ass goes back to doing real estate.