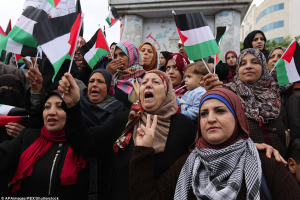 Moving the US embassy from Tel Aviv to Jerusalem & declaring Jerusalem the capital of Israel is not just a symbolic & inflammatory gesture to support Israel. Nor does it catastrophically undermine the US-brokered peace process between Israel & the Palestinians. There is no such peace process but only an ongoing diplomatic dog & pony show to legitimize Israeli colonialism, settlements, ethnic cleansing. The US cannot talk about brokering a peace process while it bankrolls Israeli militarism to occupy the West Bank, East Jerusalem, & repeatedly carpet bomb Gaza.

The US negotiated the Camp David Accords to neutralize Egypt’s support for Palestinians in return for arming the Sadat regime against the Egyptian people. The US negotiated the Oslo Accords as a legal framework to legitimize colonialism & lay out the terms of Palestinian surrender. It sounds like sarcasm & mockery that Trump put Jared Kushner in charge of the peace process when his family bankrolls illegal settlements in the West Bank but it is fully in accord with US policy for Israel & the Palestinians. It is unlikely that Trump was acting on his own since Israel functions as a military fortress for the US against democracy in the Middle East.

Many commentators claim the Trump declaration was driven by lowbrow attempts to appeal to his political base of rightwing Christian evangelicals who support Israel, American Zionists, & Sheldon Adelson, the Zionist who donated $25 million to the Trump campaign. The move may coincidentally be to Trump’s advantage but it is most likely that US policymakers are using Trump’s venality & corruption to escalate the appropriation of the West Bank, East Jerusalem, & Gaza by Israel using the occupation & Oslo Accords.

Palestinians are not protesting a symbolic gesture but a deadly-serious escalation of Israeli colonialism in collaboration with the US. Our response to this maneuver must be to mobilize across the globe demanding the US, Europe, & Middle East regimes cease collaboration with Israel & end the funding of occupation & colonialism.

(Photo is from AP Images/REX Shutterstock)