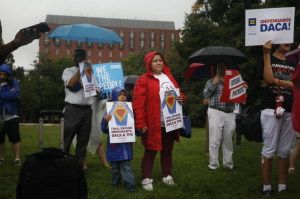 Trump is poised to end the Deferred Action for Childhood Arrivals (DACA) program which Obama initiated by executive order in 2012. Trump campaigned on ending DACA & has to make a decision by September 5th. DACA is a program for undocumented immigrants brought to the US as children which requires them to register & reregister every two years with immigration authorities to get a work permit & driver’s license. It is not amnesty but entirely provisional with many restrictions & was never a legal commitment to permanent residence or citizenship. From the beginning, it was repeatedly challenged in the courts & it was only a matter of time before it would be reversed.

There are an estimated 12 million undocumented immigrants in the US. According to one estimate, about 1.7 million might have been eligible for DACA but since 2012 only about 800,000 registered. Over 60,000 were denied as ineligible. Now it’s likely to be ended & the fate of those who registered, including those ruled ineligible, has become more precarious. Many spotted it as a scam, a deferred deportation program where you hand immigration your identity & location so they know just where to pick you up when DACA gets reversed. Many immigration counselors & activists advised clients not to register with DACA, not to place any trust in a program with the fatal flaw of disclosing your location without legal commitments.

The immigration rights movement will have to take to the streets again in massive numbers since Trump has made attacking immigrants the centerpiece of his tenure.
Immigration is a human right. Open the borders.

Photo is activists at a pro-DACA protest in Washington, DC.