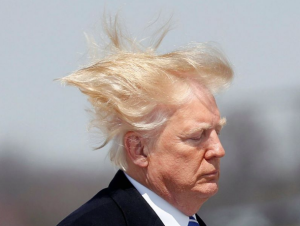 Early this morning, the US, UK, & France launched airstrikes on three sites in Syria in retaliation for the chemical attacks on Douma last week. War mongers have been pressuring Trump to lay bombs on Syrian airfields but instead the military triumvirate bombed a chemical weapons research center & two chemical weapons storage facilities. US Secretary of Defense Mattis says the bombing, which came after a week of threats, was a one-time shot like the bombing of the empty airfield last year. Apparently the US has a gentlemen’s agreement with Russia to control Assad’s use of chemical weapons–as if Russia is averse or the least bit squeamish about war crimes–but they were careful not to get close to any Russian bases or facilities in Syria.

Hopefully, this dog & pony show will satisfy the war mongers who look to the US Pentagon under the deranged Commander In Chief Donald Trump to save the Syrian revolution–just like the US is saving the Yemeni, Egyptian, & Bahraini Arab Spring uprisings through massive repression & carpet bombing. They haven’t been able to explain what cognitive disorder leads them to think the US is changing its entire military history of overthrowing governments & installing dictators to morph into freedom fighters on the side of revolution in Syria. Their war mongering is reactionary & dangerous because it helps legitimize US military intervention in other countries. This dog & pony show will certainly feed the umbrage of Assad propagandists & their fellow travelers who are put in the regrettable position of denying that Syria was researching or storing chemical weapons while at the same time denouncing the US for bombing the chemical weapon labs & storage depots. Such are the conundrums of militarism.

Lets cut the crap & face the harsh realities of life. The only principled demands are for the immediate cessation of Syrian, Russian, & US coalition bombing in Syria & the immediate, unconditional withdrawal of all foreign military forces from Syria.

Photo is the leader of the free world morphing into a revolutionist in Syria. Yeah right!