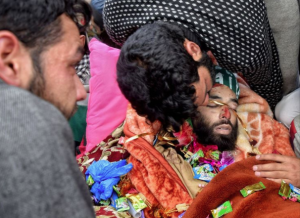 We should take a moment to honor & pay respects to 23-year-old Waseem Shah, a rebel who was killed along with fellow rebel Naseer Mir. Last Saturday, police, CRPF (counterinsurgency) & army troops set up a hunt to kill operation based on information that Shah was hiding in the area. Earlier in the week, five other young rebels were also killed in such operations. We don’t have to agree that guerrilla warfare is the wisest strategy to honor the lives of these young men. Kashmiris have a right to defend themselves by any means necessary & they were committed to the freedom struggle against a brutal occupation. For that they lost their lives. For that thousands of Kashmiris honored them with a massive funeral procession. For that, we honor them. May they Rest In Peace.

The photo is a family member kissing young Waseem goodbye.