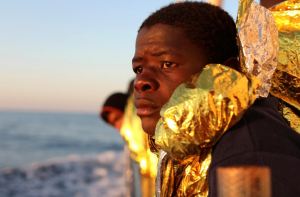 The term most analogous to Eurocentrism for the US is American exceptionalism, an old concept recently promoted by Obama & Clinton which places the US at the center of the universe & at heart means our superiority exempts us from the highest standards of human civilization & mandates colonial wars.

It’s peculiar isn’t it that those who deride protesters against the Muslim ban necessarily employ exceptionalism to argue their paltry case by saying if we didn’t march against Obama’s wars, we shouldn’t march for refugee rights–as if the US were the only country barbarically debarring millions of refugees & as if we didn’t have a moral & political imperative to render solidarity to refugees. Supporting refugees is part & parcel of opposing US wars.

The protesters aren’t so provincial as to only demand refugee rights for Muslims but are demanding no wall on the US-Mexican border. In Europe & elsewhere, protesters are demanding the EU open the borders to refugees from the Middle East, Africa, Asia. They express a breadth of vision that opposes wars & demands asylum for brothers & sisters from wherever they come & for whatever reason, including Rohingya refugees fleeing genocide.

There are more photos now of African refugees debarking from Libya. For a long while there were none & thousands continued to drown. Those being rescued from drowning by the private humanitarian operation Proactiva look traumatized & terrified. There aren’t a lot of reports of what most have gone through just to get from war zones & sweatshop zones to Libya but the reports that do exist are gut-wrenching. Many come with children; many are teenagers & children traveling alone.

It doesn’t matter what country we live in nor how we responded to Obama’s wars. We have a moral & political duty to support refugees in whatever way we can. Because that is what human beings do for other human beings fleeing war. Those who sneer or try to undercut that solidarity should hang their heads in shame & just let history pass them by.

This young man’s face expresses so well the trauma & uncertainty so many have endured. He is standing on the deck of a Proactiva rescue ship off the coast of Libya. Those many who cannot rally may want to consider contributing to Proactiva or Médecins Sans Frontières/Doctors Without Borders, who are both on the front lines of the refugee crises.

Open the damn borders. No human being is illegal. Refugee asylum for all.