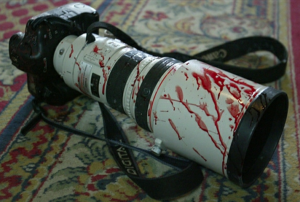 In an era of fake news alarmism, it’s important to recognize there are authentic journalists on the ground risking their lives to report what is going on. Especially in conflict zones they are under attack by those who want propaganda to serve as news or who do not want political criminality exposed. That’s why three Kashmiri journalists were injured yesterday, why Israeli snipers are shooting down Palestinian journalists at the Great Return March, why the Rohingya citizen journalist network has been disappeared by the Burmese military, why Assad hires propagandists to serve as his voice & bars legitimate journalists, why there is a news blackout on war in Afghanistan, Iraq, Yemen, Libya, Somalia.