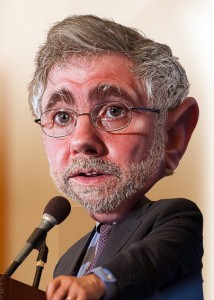 Who does Paul Krugman, the economist & NY Times columnist, speak to? Who is his audience? Does he actually impress progressives? Because he is proof positive that you can hold a PhD & still be dumb as a stump. Either that, or he’s completely amoral.

He recently wrote a defense of Obama for Rolling Stone magazine calling him “one of the most successful presidents in American history.” Enough with the hyperbole! What about all those wars? He also wrote a defense of Clinton & criticism of Sanders (saying Sanders “needs to disassociate himself from voodoo of the left”). Krugman’s fully committed to the Democratic Party establishment.

How anyone can respect this schnook after more than 20 years of his defending sweatshops boggles the sane mind. In that pompous professorial tone of his he says things like: “Given their low productivity, countries like Bangladesh can’t be competitive with advanced countries unless they pay their workers much less & provide much worse working conditions too. The Bangladeshi apparel industry is going to consist of what we would consider sweatshops, or it won’t exist at all.” To his amoral & racist pea-brain, that suffices as a defense of sweatshop economics.

So once again, who does he speak for, If not the oligarchs massively profiting from sweatshops & the exploitation & dehumanization of working people? He thinks he’s being clever & disguising his idiocy when he writes about voodoo in economics & politics. There’s nothing more voodoo than a stump trying to explain away the degradations of capitalism.

(Caricature of Krugman by DonkeyHotey)