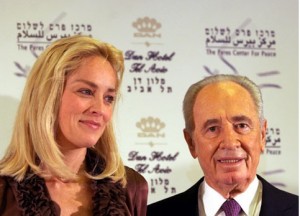 Sharon Stone is the latest celebrity to cancel a film project in Mississippi because of the state’s recently passed anti-LGBT law. Consistency appears to be as big a challenge for her in politics as it is in acting since for years she has flaunted her relationship with apartheid Israel.

She grandstands frequent visits to Israel under the guise of humanitarianism, visiting children in hospitals & sitting on panels with Robert De Niro & other know-nothings to discuss peace in the Middle East. To show her sophisticated grasp of the issues of colonialism, apartheid, & ethnic cleansing, she said: “I look at the absence of peace as a fatal disease. If we get into the deep-rooted history of the conflict, we’ll never see peace, & that’s fatal.” Theoretically very akin to Clinton’s, “Hamas provokes Israel. They often pretend to have people in civilian garb acting as though they are civilians who are Hamas fighters.”

Stone is a Buddhist (of sorts) but her 13-year-old son conducted his bar mitzva at the Wailing Wall in Jerusalem. She may feign some sort of emotional attachment to Israel but in most cases you scratch that sentimentality stuff & you find money-grubbing or rightwing commitments. It’s almost an iron law of rotten politics.

Photo is obligatory photo op with Shimon Peres from Stone’s 2006 visit to Israel.