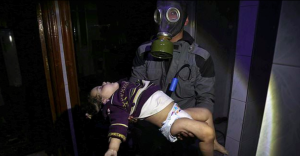 You shake your head in disbelief that white people who’ve only been to Syria a matter of days or weeks embedded up the ass of the regime are given any hearing at all over the voices of 5.5 million Syrian refugees or activists like Yassin Al Haj Saleh, a former Assad political prisoner, & the White Helmets. Eva Bartlett once admitted she didn’t know anything about Syrian history or politics before 2013 when she got hired on as a propagandist. She admitted her entire education came from Global Research, the libertarian, anti-Semitic, & Islamophobic cesspool–& probably from David Icke who thinks reptilian Jewish bankers rule the world & for whom she worked–though you don’t need an education if you function as a ventriloquist dummy. Vanessa Beeley was riding horses & doing sales before she got hired on in 2014. So what gives them credibility to say the videos of bombing victims are all staged with kidnapped child actors? Are they video forensics experts too?

What gives Robert Fisk, who looks down on Arabs & doesn’t understand one damn thing about the Arab Spring uprisings, more authority than the White Helmets, Syrian citizen journalists, or the several doctors who say they were coerced into denying the chlorine attack on Douma? What gives Max Blumenthal, Ben Norton, Rania Khalek, Vijay Prashad, Craig Murray, Jonathan Cook, or all the others any credibility? These are social climbers & children of privilege with an instinctual abhorrence to working class rebellion against injustice & inequality. They have no commitments except to their careers. They’ll say anything that gets them honoraria & TV slots.

The answer to this enigma is written all over the script: white supremacy, Islamophobia, anti-Semitism. The fact that Black writers like Margaret Kimberley, Glen Ford, & Ajamu Baraka are among the most ardent & paranoidal fellow travelers of the white propagandists doesn’t alter that reality an iota but only testifies to the crisis of Black political leadership that libertarianism has made such inroads into their thinking. The only reason these propagandists carry such weight–other than idiocy, racism, & credulity–is that Russian media, especially RT, back these propagandists to the hilt & give them income & a platform & that the Assad regime & Russia know how to manipulate & play social media.

There will come a time of accounting. Those Syrians now shouted down will set the historic record straight. It will be too late to salvage the Syrian Arab Spring uprising. But not too late to rebuild the historic movements of the Arab peoples to build new societies based on equality, democracy, & justice.