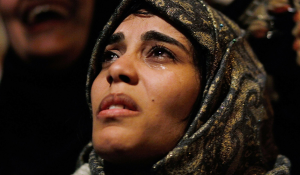 This is the anniversary of the titanic Arab Spring uprisings which all began about this time in 2011, including in Tunisia, Egypt, Yemen, Bahrain, Syria, with reverberations in Jordan, Iraq, Morocco, Libya. Despite the sneering postmortems of cynics, they were glorious events when working people by the millions put their lives on the line to bring down dictatorships & make this world a better place to live. To speak of them with scorn & sneering only exposes ignorance about the immense problems faced in the complex process of social transformation. Massive repression is required to contain them in Egypt & Bahrain; counterrevolutionary coalitions engaged in carpet bombing in Yemen & Syria have still not brought those revolutions to a decisive defeat. Libya is now a hellhole with two regimes, ISIS, & foreign armies. If you want to understand the hatred for Muslims & the use of Islamophobia as a battle cry, look to the impact of the Arab Spring uprisings.

We should take a moment to pay tribute to the millions of revolutionists, so maligned in propaganda, who fought so intransigently against insuperable odds, & to the thousands who lost their lives. They show the best humanity is made of; they are the vanguard of social transformation. Those who look at the Arab Spring with scorn have missed some of the most remarkable events in human history. The Arab revolutions have not been permanently defeated. Those of us who want to create a suitable world for human beings to live & love in are wise to look to them to understand the complexities & problems faced in the struggle for social transformation which they began & can be brought to completion.