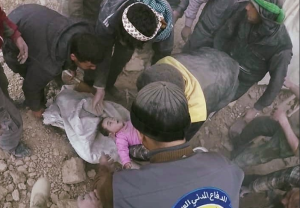 The Syrian Observatory for Human Rights reports that since February 18th–17 days of a ceasefire–805 civilians, including at least 178 children, have been killed by Russian & Syrian bombing in Eastern Ghouta. Unlike news blackouts on all other wars, there is considerable media coverage, with mountains of video & photographic documentation. Because of their power & poignancy, it is common & absolutely appropriate for photojournalists to focus on the suffering of children in war, occupation, genocide.

Governments like the US & EU nations are not denouncing Assad & media is not covering the Syrian counterrevolution because their politics have magically morphed & they now see the horrors of war. Under the guise of fighting ISIS, the US coalition has killed, injured, displaced, & traumatized hundreds of thousands of Syrians. What they have done in Iraq is beyond Armageddon. The US & European militaries are part of the counterrevolution (along with Russia, Iran, Turkey, Hezbollah, the Saudis, et al) but they have designs on Syria which have nothing to do with democracy & the fulfillment of the Arab Spring aspirations. They’re playing a duplicitous & dangerous game with the Syrian revolution–a duplicitous game which however does not fool the Assad regime, which is in many ways incidental to US designs on the region.

To show the utter depravity of Assadism-cum-fascism, Assad propagandists like Bartlett & Beeley are on a feverish campaign to combat the images of children in Eastern Ghouta in order to maintain that Russia & Syria are bombing terrorists, not civilians. There aren’t many serious, reputable journalists they can turn to so they’re resorting to Islamophobic & racist extremists like Katie Hopkins & Peter Hitchens for support. They are going through a few of the hundreds of videos from Ghouta as if they were forensic investigators to show that children buried in rubble or rescued are either human shields for terrorists or agitprops in terrorist propaganda films. How loathsome & low can you go!?

Bartlett spent several months in Gaza, most likely to get credentials as a professional propagandist. She knows exactly what to claim about the slaughter of children in Eastern Ghouta because it is identical to what Israeli & Zionist propagandists claimed when Israel was engaged in carpet bombing Gaza in 2014. They called videos of suffering children in Gaza Pallywood productions & the “Palestinian fake image industry” even though several human rights agencies reported that Israel directly targeted children. Just as Assad & Russian war planes are directly targeting children & civilians, not terrorists.

Stand with the Syrian people by demanding the immediate cessation of Russian, Syrian, & US coalition bombing of civilians & the immediate, unconditional withdrawal of all foreign military forces from Syria.

Long live the Syrian revolution against the Assad regime.

(Photo of child being rescued in Eastern Ghouta on March 5th, from White Helmets)