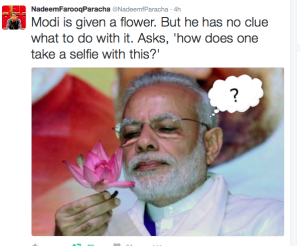 It’s in style now to offer birthday felicitations on FB on the birthdays of political figures. They were abundant, if not over-florid, on the 11th for Assad & on the 17th for Modi. Now we’re being prompted to start early on felicitations for Clinton whose birthday is next month.

Some of us would rather chew construction nails or stick knitting needles in our eyes than stoop to fawning over lowlife politicians. But that’s just those proud enough to want to keep their dignity intact.

This sarcastic tweet is from a man who writes for Dawn, the Pakistani newspaper. It may not be biting enough but it isn’t kissing ass.