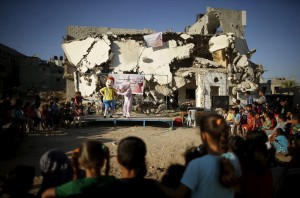 These are Palestinian actors doing children’s theater in front of a bombed-out house in Gaza City. The Guardian-UK caption said “witnesses” claim the house was “destroyed by Israeli shelling” during Operation Ethnic Cleansing last summer. Does that mean the jury is still out on whether evil fairies from outer space might have done it? Why doesn’t the Guardian drop the nonsense!?

The caption did cite a “global children’s charity” that the children of Gaza show signs of extreme distress & trauma. Good thing they had that charity because God knows, you can’t trust the parents of Gaza when they say the same thing about their kids. They could be the same people as those “witnesses.”

Thousands of children hunted & traumatized by bombers, watching their terrorized parents scramble to protect them, watching their homes reduced to rubble, & now living in homelessness must be hell on earth. It’s wretched enough to contemplate.

There is no reason for despair but only cause to become evangelists for the economic, cultural, & academic boycott of Israel (BDS). Spread the word.