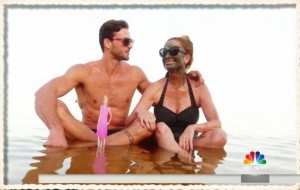 You can learn a lot from occasionally browsing Zionist FB walls. For one, there is a profound strain of irrationality, almost a leitmotif, that Israel (one of the mightiest military forces in the world) has no allies but stands alone like David against the Goliath of unarmed Palestinian Intifada. The US is a frequent target of criticism–a whopping case of biting the hand that feeds you after all those billions in military & settlement aid. “Communist China” is coming in for its share of vituperations now despite billions being spent in an orchestrated campaign to bail out Israel from the impact of BDS.

But moving beyond the irrational to the news, we learn the disreputable but always smug Kathy Lee Gifford (associated several years ago with sweatshops in Honduras) & singer-songwriter David Pomeranz, both Zionists, just returned from shooting segments in Israel for NBC. They composed & sang a dozen paeans to Israel while there & will be touting Israel’s cuisine & appeal as a tourist destination. Do you detect the hidden hand of propaganda to counter BDS going on here? The good news is that Gifford singing the songs will be sure to make them a wash.

Without those FB walls we might not know that this week in Berlin 100 parliamentarians from 40 countries gathered for the third conference of the Inter-Parliamentary Coalition for Combating anti-Semitism–a front operation initiated by German Chancellor Angela Merkel who is orchestrating the murderous EU policy toward refugees. Participants include gangs of politicians from the UK & Israel, as well as EU Commissioner Frans Timmermans, Britain’s Secretary of State for Justice Michael Gove, German Foreign Minister Frank-Walter Steinmeier, & former Israeli Foreign Minister Tzipi Livni. Not what you would call the vanguard of human rights on planet Earth but some very important political operators meeting to counter the impact of BDS because that was the entire thrust of the conference.

Gove from the UK said: “Israel is dealing with a prejudiced, systematic attack against its existence. The BDS movement, which claims that it is working against apartheid, in retrospect is using methods of apartheid in that it calls for the shunning of Jewish academics, the boycott of Jewish goods, the de-legitimization of Jewish commerce. It is up to us to show solidarity with the Jews & with their right to national sovereignty.”

Steinmeier from Germany “expressed shock at the wave of anti-Semitism which washed over Germany during Operation Protective Edge two years ago.” Does he mean the hundreds of thousands who joined nearly a million people around the world in defense of Palestinians against the murderous seven-week carpet bombing of Gaza?

There were all sorts of veiled threats coming out of that conference in Berlin. Threats letting us know BDS is having a profound impact on Israel & is mobilizing powerful forces that will try to outlaw & destroy it. An important thing to note is that there is an increase of anti-Semitic incidents in Europe coming from rightwing nationalists–the same nationalists lining up with European politicians (including those at the conference) against refugees from the Middle East & Africa.

The final thing we learn on those FB walls is that BDS has a victory worth noting. Ahava cosmetics company (selling Dead Sea products Gifford is shilling) is moving out of the West Bank, folding to BDS pressure even though a Chinese company bought controlling shares to do an end run around BDS.

Do an end run all this crap & build BDS.