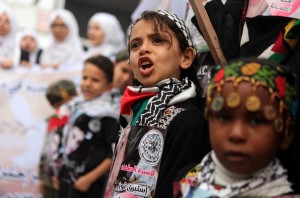 Those who came of age in the US during the Cold War & McCarthy witch-hunt era of the 1950s know all about living in fear–even if the threats were entirely imaginary. Who knew communists really didn’t put fluoride in the water to corrupt the morals of youth, as we were taught? Or that the chances of Russia bombing the US were absolutely zilch? We still had to go through bomb drills in elementary school. It was an ominous intolerant time, much more than childhood should have to deal with–when childhood is already something of a fearful time.

So imagine coming of age in Gaza (or the West Bank) where the threats are entirely real–where Israeli bombers hunt & target children; where they’ve seen family, neighbors, playmates perish in one of Israel’s bombing attacks; where there is no safe place to sleep or live nor enough food to eat? Where families worry about protecting children from ethnic cleansing?

According to UNICEF, over 373,000 children in Gaza require intensive psychological treatment for shell-shock & PTSD after Israel’s carpet bombing binge in 2014. Small children suffer crying spells, nightmares, became mute, act out hysteria, are left paralyzed with terror. Surely that is one of the greatest human rights crimes of all: depriving thousands of little children of peace of mind, of a sense of security, of a childhood filled with love & play. The only thing more criminal is disabling & killing them with bombs.

These wee girls in Gaza are protesting to demand the release of prisoners in the Israeli gulag. Close to 200 children are in Israeli prisons & it is reported 75 percent have sustained physical assaults & other torture during interrogation or detention; 40 percent are sexually abused. Now with stone-throwing ruled a felonious offense by Israeli authorities, the number of incarcerated children will surely grow. When Israel’s political strategy is ethnic cleansing, children are a primary target & not just caught up in events.

Children have a right to a childhood free of such terrors. Building the economic, cultural, & academic boycott of Israel is what Palestinians ask of international solidarity. It is the strongest way to stand with Palestinian children. Solidarity cannot give them back their childhoods but it can assure their future. Build BDS (Barcode beginning 729).