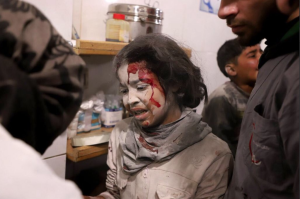 Perhaps an amoral Assad supporter could explain to this child in Eastern Ghouta the political superiority of Syrian & Russian bombing that has forced hundreds to live in filthy underground basements for the past few weeks so they don’t get bombed to death. It probably wouldn’t take much to persuade her that Assad’s national sovereignty makes all this necessary & the politically right thing to do. Especially if you throw a few Stalin quotes her way.

Or is she an actor, a terrorist, a human shield for terrorists, or as fascist Vanessa Beeley claims, a doll?

Demand the immediate cessation of Syrian & Russian bombing of Eastern Ghouta & the immediate, unconditional withdrawal of all foreign military forces from Syria.