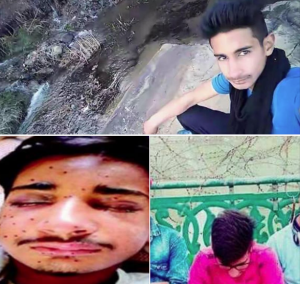 This is the story of a Kashmiri teenager blinded by pellet munitions in 2017. He was not involved in protesting when he was twice struck. It’s a moving story of how a young, sighted person copes & adjusts to the new reality of disability, disfigurement, & lost dreams. That adjustment is very difficult, especially for young people or those without means for rehabilitation. But as we know from disability rights activists, disability is not a death sentence & new dreams can be forged if people do not have to make that transition alone but have support from others. This young man wants his story told & Mubashir Naik has done so powerfully:

Farzan Nazir, a 17-year-old teenager from Srinagar, Kashmir, is living a most miserable life nowadays. Today when his friends play a cricket or any other game, Farzan, who always used to go with them, has to remain a mute spectator because his eyes have no sight to see what his fellows are doing. The story of Farzan does not stop here: nowadays the craze of selfies is at a peak but for him it’s another painful sight. When his friends take a selfie with him he usually bows his head down to hide his blind eyes. Farzan was hit twice by the occupied forces during the years of 2017 when he was 16. The first time he was hit by pellets on his left was on 17 march 2017 when was out to bring milk for his family which damaged his left eyesight. But after this episode he didn’t lose hope & remained in touch with books in order to appear in his 10th class exam. But the innocent guy didn’t know that his dream will never be fulfilled & on the evening of 17th August, when he went out on the street to switch off the street light which was irritating him, he was hit by pellet again & this time both his eyes were damaged. A determined Farzan attended his paper which was written down by his helper & he passed his exam. But he is asking everyone ‘how can I complete my aim now with these blind eyes’? Farzan a young man was dreaming to become a software engineer but all his hope has been shattered & now he wants to die instead of living this life. For him death is better than life for him. Farzan doesn’t belong to a rich family. His father is a middle class person who runs a little shop to earn his bread & butter. Farzan last but not least wishes that people should turn united to fight this oppression so that in the future there may be no injuries like those done to Farzan. If yesterday was his turn to suffer, tomorrow maybe another & the violence process will continue. He also wants to get help by people so that he can go abroad for treatment if any miracle will bring his eyesight back. He wants his story to be heard by the international community. Because at 17, he is cursing himself & asking everyone why he wasn’t targeted with a bullet when pellets hit him the second time.

The photos are of Farzan before he was blinded, in hospital, & hiding his face during a selfie with friends.