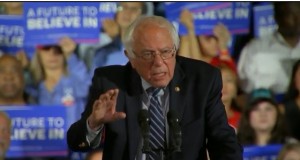 The capitulation has begun. Yesterday banner headlines said Sanders vowed to fight to the Democratic Party convention. Today they declare (after a meeting with Obama) that he vows to work with Clinton for party unity “to defeat Donald Drumpf.”

This is where lesser evil support for Sanders bites the dust. It’s all over but the crying. This is always what it was all about & it’s regrettable so many fall for it over & over again. It’s a conservatism in the American political psyche that cannot break with the vicious cycle of lesser evil politics–although the majority of eligible voters don’t even bother to register, let alone vote.

Sanders functioned like Eugene McCarthy, George McGovern, Jesse Jackson, & so many others before him–like the barker at a circus sideshow to draw in the customers. Ironically, he did not build a political revolution like he claimed but he did expose the profound fault lines of the Democratic Party, its lack of internal democracy, its political machinations, & its complete alienation from the interests of working people in this country & around the world.

As a result of his campaign, the Democratic Party is exposed as a mess when his role was to strengthen it on the high hopes of young people. Feeling berned yet?