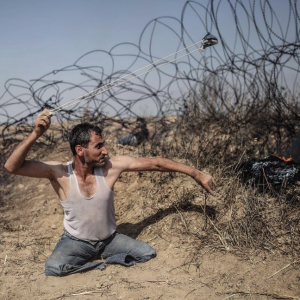 29-year-old Palestinian Saber Alashqar previously lost both legs from Israeli drone rockets in Gaza & is here stone pelting at the Great Return March yesterday. As we saw in the European anti-austerity protests of 2010, especially in Greece, Spain, Portugal, & the 2011 Arab Spring uprisings, the movement for disability rights has merged with the movements for social revolution against autocracy & repression. Those with disabilities no longer stay home so as not to discomfit the rest of us & many without disabilities roll the wheel chairs so that activists with disabilities can participate fully. Especially in Gaza which has such a high amputation rate from Israeli bombing, those with disabilities are guided by the struggle for freedom & justice, not by the limitations of their disability.