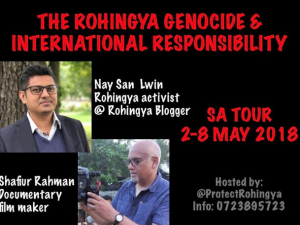 From May 2nd through the 8th, Rohingya activist Ro Nay San Lwin & documentary filmmaker Shafiur Rahman will be on a speaking tour of South Africa. There isn’t yet a schedule of cities & venues posted but it’s coming. Both men play a considerable role in educating about & mobilizing against the Rohingya genocide so this is an opportunity to be part of the arduous campaign to build the structures of solidarity against the genocide.