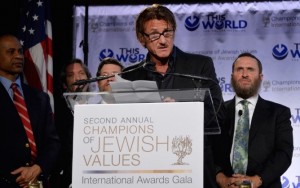 Don’t stop me now. I’m on a roll with my damnations of Sean Penn for posturing as a liberal while operating as a wretched-assed right-winger hanging with the most reactionary forces in world politics.

His collaboration with the Clintons, Duvalier, & Martelly in Haiti puts him in the criminal category without dispute but he also associates with the Zionist extreme right. He made the obligatory pilgrimage to Israel to be photographed with Shimon Peres last year. This photo is from when he was given the Champion of Jewish Justice Award in 2014.

The award ceremony/pro-Israel rally was hosted by Sheldon Adelson, (the right-wing gambling magnate who just endorsed Drumpf) & Shmuley Boteach, a crazy-pants, right-wing Zionist rabbi who actively promotes illegal settlements in the West Bank. The guests at this vampire’s ball included Chris Christie, notorious for a million idiocies & his support for Drumpf; Elie Wiesel, the guy who milks his holocaust experience for all it’s worth in honoraria & who accused Palestinians of using their children as human shields to justify Israeli carpet bombing in 2014; Alan Dershowitz, who leaves a sulfurous odor wherever he appears; Hawaii Rep. Tulsi Gabbard, whose endorsement of Bernie Sanders was lauded by his supporters despite her many right-wing associations; Ayaan Hirsi Ali, the notorious Islamophobe making a bundle posing as a feminist reformer.

Another person present was John Prendergast, always referred to in media as a human rights activist but who is almost certainly a CIA operative based in Africa (second from the left in this photo). He’s always seen with George Clooney on the occasions when Clooney leaves his red carpet lifestyle to war monger for US intervention into Darfur. Prendergast plays a central role in the conflict with Sudan over Darfur (a region in Sudan) & was a key US operative in the secession of South Sudan from Sudan. It is certainly relevant that Israel has considerable investments (i.e., plunder operations) in South Sudan. He is also involved as an operative in other African countries.

It’s just a fact in politics that you can’t play both sides of the street. When Penn associates with the most right-wing & corrupt elements in world politics, we can assume that is where his political commitments are. It’s the old “if it walks & talks like a dirt-ball it must be a dirt-ball” thing.