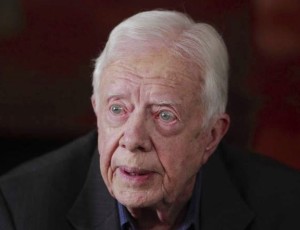 Former US president Jimmy Carter is reportedly dying from cancer. I’m not going to write an anti-obituary celebrating his death like I did for Israeli politician Ariel Sharon or Egyptian torturer Omar Suleiman & as I look forward to doing for Madeleine Albright & Henry Kissinger. But I will not be joining those who mourn & herald him as a man of peace. Does the rather equivocal work he’s done around Israel & Palestine after his term in office compensate for his policies in Iran, El Salvador, the Philippines, & in encouraging the Soviet invasion of Afghanistan? I think not.

It’s true he’s brought some understanding about Palestinians & Israel but his work is a mixed bag. Despite the furor it evoked, his 2006 book “Palestine: Peace Not Apartheid” is too equivocal about Israeli apartheid to be considered an indictment. He does not so much designate Israeli policies as apartheid as depict the barbaric realities of those policies in the occupied West Bank. Good for him & a tip of the hat for standing the guff he received for writing the book.

It’s on solutions that Carter’s equivocations stand out. He publicly opposes BDS, representing that view as a member of The Elders, & is an outspoken promoter of the two-state, bantustate solution for Palestinians. He’s been involved in Middle East politics for several decades & should know by now that’s an unworkable, undemocratic, & apartheid solution.

There’s a political history to Carter’s role in Palestine that cannot be ignored. It’s not too dramatic to say he has blood on his hands from brokering the Camp David Accords in 1978 when he was president. Those accords, signed between Anwar Sadat of Egypt & Menachem Begin of Israel, were so flawed they were even rejected by the UN. Jordan & Syria refused to participate (at least openly) & Palestinian representatives were excluded. The accords had nothing to do with Palestinian justice but with neutralizing Egypt & making it a partner with the US & Israel in isolating Palestinians. The accord provisions established the framework for the betrayal of Palestinian justice negotiated by Yasser Arafat in the Oslo Accords in 1993.

In return for massive Egyptian trade concessions to Israel (including ending the boycott by Egypt & opening the Suez Canal to Israel), the US committed to billions of dollars in military aid to Egypt & established it as a military bulwark supporting Israel against Palestinians, by the Egyptian regime against its own people, & for US hegemony in the entire region. Sadat was assassinated for his betrayal but the military arsenal created in Egypt by the Camp David Accords made possible the defeat of the Egyptian uprising in 2013 & the continuing repression of democracy in Egypt by the Sisi regime.

That is the legacy of Jimmy Carter.