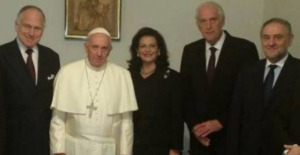 This post from October 30th, 2017 about Pope Francis’ relations with Israel may be worth reposting. When the pope speaks on matters of Catholic doctrine, that is an issue of religious freedom. But when he offers opinions on political issues (including women’s rights), he enters the political arena where his views can be accepted or criticized on their relation to justice. He has offered Palestinians a few symbolic empty gestures (like saying some Hail Marys at the apartheid wall during a visit) but those were overshadowed by his later venerations at the tomb of Theodore Herzl, the theoretical founder of Zionism, a rightwing supremacist & nationalist doctrine.

Pope Francis is not being naive when he says: “To attack Jews is anti-Semitism, but an outright attack on the State of Israel is also anti-Semitism. There may be political disagreements between governments & on political issues, but the State of Israel has every right to exist in safety & prosperity.” That makes him a committed defender of Israeli colonialism, apartheid, ethnic cleansing, occupation. Just as he offers sympathy to Syrian & Rohingya refugees whilst Catholic prelates collaborate with the fascist regimes in Syria & Burma. His politics are no more progressive than those of Pope Benedict who was removed because of his fumbled attempts to make the stench of pedophilia at the Vatican go away. Note that Pope Francis has done just that without ever seriously addressing the issue of sexual assault on children but by playing the people’s pope.

When Pope Francis speaks on Catholic faith & morals, no one would utter a peep of criticism. His comments would be respected as part of religious freedom, even with all the monarchical trappings of the Vatican. But when he enters the political arena, he is no longer speaking ex-cathedra as the Catholic pope & he has to face the music of his politics just like everyone else–especially since his views on several political questions are less than infallible.
October 28th was the 50th anniversary of “Nostra Aetate,” or “In Our Time,” a 1965 declaration on the relation of Catholicism with non-Christian religions. The document was intended to change the rancid intolerance of the Vatican toward Jews, Muslims, Hindus, & Buddhists–an intolerance that led the Vatican to shameful collusion with Nazis during WWII under Pope Pius XII.

Pope Francis dedicated his general audience on Wednesday to touting “In Our Time” & invited representatives from non-Christian religions as honored guests. A large contingent was present from the World Jewish Congress (WJC) who had called their annual conference in Rome to coincide with the anniversary of the declaration. The WJC, headed by Ronald Lauder, is one of the most powerful Zionist groups in the world.

The Vatican’s hateful relations with other religions needed to be changed so commemorating a shift from blaming Jews for the death of Jesus–which for centuries fed hatred & persecution of Jews–to ecumenism is entirely laudatory. But Pope Francis didn’t leave it at that. His homily not only condemned anti-Semitism but he claimed attacks on Israel’s right to exist are a form of it: “To attack Jews is anti-Semitism, but an outright attack on the State of Israel is also anti-Semitism. There may be political disagreements between governments & on political issues, but the State of Israel has every right to exist in safety & prosperity.”

What he didn’t address in his homily was the right of Palestinians to exist in safety & prosperity. And he didn’t utter a peep opposing Israel’s current pogrom against them. He did however lament the rise of terrorism & fundamentalism. Now whose terrorism do you think he might be talking about? Israel’s against unarmed Palestinians? Or was he referring in veiled language to the “stabbing Intifada” alleged by apologists for Israel’s pogrom?

WJC president Ronald Lauder praised the pope for his comments about anti-Semitism. Of course he did! It was a propaganda coup to have the pope equate anti-Semitism with anti-Zionism. He said Francis “inspires people with his warmth & his compassion. His clear & unequivocal support for the Jewish people is critical to us.” Of course it is–although not everyone is inspired by his lack of compassion for Palestinians. That’s why the pope said it–to align the Vatican with apartheid Israel against the Palestinians. Unfortunately just like Pius XII did with fascism against Jews.

The pope can sing that humble pie stuff till the cows come home but if he turns his back on Palestinian justice in a Bernie Sanders-style political maneuver, we have every right to excoriate him.

Photo is WJC president Lauder (on left) with Pope Francis & other WJC officials at Vatican on Oct 28th, 2015.