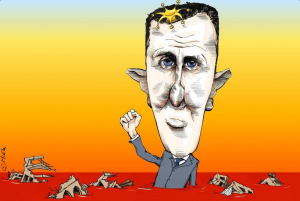 Long simmering differences over Syria have erupted to the boiling point with the fall of east Aleppo. The disputes are over life & death questions for millions of Syrians–actually for the entire Middle East–so there’s nothing collegial about them & they cannot be brokered through platonic discourse & diplomacy. The likelihood is that persecution & discrimination against Muslims, particularly women, & refugees will increase because of rising nationalism & xenophobia fed by Assadist vituperations about “jihadist terrorists.”

It has to be said frankly that racism & white supremacy are central to the differences which is evidenced most markedly by how Assad supporters approach the issues in Syria. Though they posit themselves as humanitarian, their point of reference is not the bombing of civilians, the deaths of 500,000 people, the internal displacement of 7 million Syrians & the refugee flight of 5 million others. Assad supporters don’t even ask about any of that.

What absorbs their attention is a visceral, apolitical hatred for US intervention. US militarism is certainly a worthy object for hatred but Assadists are unable to elaborate US policy anywhere except with the formulaic “regime-change” scenario–as if there were no complexities to societies in the Middle East nor different strategies required for political & military intervention. That hate thing has an irrational character not because it is against US militarism (the majority of the human race hates US militarism) but because it doesn’t have much to do with the unimaginable suffering of the Syrian people or their thwarted aspirations for freedom from dictatorship. There’s no–for want of a better word–human aspect to the hatred.

Then there’s that peculiar fetish about mainstream media, about how it’s all lies & only Vanessa Beeley & Eva Bartlett who both spent just a few weeks in Syria can be trusted. Just in the past 48 hours thousands of Assad supporters have circulated a video of a western woman mocking & discrediting the Syrian journalists reporting from within east Aleppo. The racism almost takes your breath away. Two western women with almost no experience in Syria who travel there accompanied by Assad officials & under Syrian military security are trusted about Syrian politics but Syrian journalists are maligned as frauds associated with “jihadists” & perpetrating fake news.

Once the Assadists start in on the US-backed “head-chopping jihadist terrorists,” there’s no stopping them & no reasoning possible. They enter a whole other dimension of white supremacy, unhinged territory so evocative of the KKK & fascism. The process called “othering” goes into overdrive.

We need to understand this rupture taking place because it’s a watershed moment in time. But our primary focus must be unifying & mobilizing those who stand with the people of Syria against Assad’s dictatorship & against foreign military intervention of any kind from any country.

Cartoon is by Nicola Jennings on Bashar al-Assad & the fall of Aleppo.