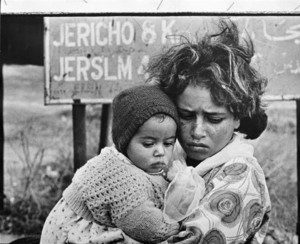 The issue of Palestinian refugees is not often enough examined & perhaps is not fully understood. But to understand the intransigence of Palestinian intifada, we need to look closely at the lives of the estimated 5 million Palestinians still living in refugee camps in Gaza & the West Bank, in Jordan, Lebanon, & Syria. Their right to return to their homeland is one of the most contentious issues in Palestinian politics–& perhaps in world politics–because while they languish in squalid camps by the millions, Israel is recruiting & transporting Zionists from around the world to take Palestinian lands & occupy their homes & villages.

The original nakba (catastrophe), when Zionist paramilitary & terrorist squads drove 750,000 Palestinians from their villages & lands was in 1948. That’s when Zionists formed the Jewish-only state of Israel–which is less a nation-state that an armed citadel & enclave of social hatred.

But when you look at a time-modified map of Israel’s expropriation of Palestine, you see that thousands more Palestinians are always being driven into refugee camps as Zionist settlers expropriate more & more of their territory. There have been major events like the 1967 Six-Day War, when Israel occupied the West Bank, Gaza & east Jerusalem, & refugees dramatically increased, but it’s been a nonstop problem since 1948.

The old pup tent camps have transitioned to concrete blockhouses & to what seem permanent urban slums with now a fourth generation of Palestinians coming of age in them. There are about 59 camps where the UN Rellief & Works Agency (UNRWA) provides social services. You can’t just walk into one of the camps claiming to be a Palestinian refugee uprooted by Zionist settlers & expect to get UN assistance. You have to register with the UNRWA & fit their criteria. Human diaspora isn’t that tidy a thing. The criteria leave a lot of Palestinians out in the cold without access to social assistance.

UNRWA is a peculiar UN agency; it was formed solely to address Palestinian refugees in the 1948 nakba & does not work with refugees in any other part of the world. There has been lots of criticism of UNRWA, especially from Zionists who claim it has an anti-Israel bias & covers for Palestinian terrorists–the usual crazy-pants charges of Zionism.

But there are also criticisms that it fosters dependence among Palestinians. That accusation could be considered the usual grist of anti-welfare gripers but a more compelling concern expressed is that UNRWA dampens the energies of intifada. There are photos from the 1948 nakba showing convoys of UNRWA trucks carrying Palestinian refugees to refugee camps. It’s not imprudent to ask whether they were rescuing refugees or facilitating ethnic cleansing.

All stages of the Palestinian exodus have been documented by the UNRWA. Their archives now include 525,000 negatives, photos, slides, films, video cassettes. With grants from Denmark, France, & the Palestinian private sector they are now digitizing the archives as part of UNESCO’s Memory of the World List archives. Most of the work is being done in Denmark but about 50,000 photos are being processed in Gaza (despite the possibility Israel could bomb them into smithereens). An online database now has close to 2,000 images.

As the ethnic cleansing of Native Americans proceeded in the US in the last decades of the 19th century & early 20th century, oligarchs like J.P. Morgan & Theodore Roosevelt originated natural history museums to house artifacts from indigenous cultures they were attempting to drive into extinction to serve the needs of capitalist expansion. They also commissioned photographers to go west to document native peoples before they went extinct. There are volumes of those photos which glorified Native Americans already vanquished & living in squalor on reservations. Despite the odious intentions & genocidal historic vision, the photos are invaluable.

So too, the photos of Palestinian nakba. But the UNRWA is no more to be trusted than J.P. Morgan. Those who believe in justice don’t want an archive of a vanquished people. Native Americans & Palestinians deserve more than a photographic record of their exodus; they deserve justice & the return of their rights & lands. Continuing Palestinian intifada is the only assurance of justice–& for that international solidarity is needed.

Palestinians & their supporters can draw on this archive as it becomes available to educate about nakba, diaspora, about the nature of Zionism, & to promote Palestinian solidarity & BDS.

This photo from the archive is Palestinians arriving in a refugee camp in east Jordan from either the West Bank or Gaza in 1968 after the occupation by the Israeli military.